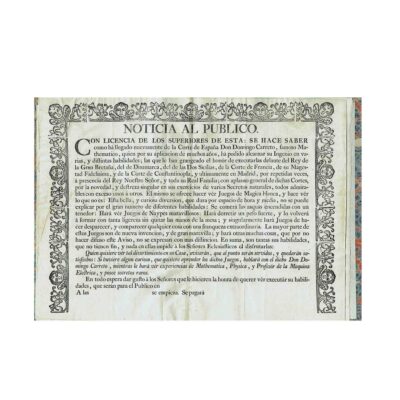 [POSTER WITH AN ANNOUNCEMENT OF AND INVITATION TO A PERFORMANCE OF MATHEMATICIAN AND MAGICIAN DOMINGO CARRETO FOR THE SPANISH ROYAL COURT.] S.l. [Madrid], s.t. et a. [ca. 1700-1750].

Particularly rare poster announcement of and invitation to a show by mathematician and magician Domingo Carreto for the Spanish Royal Court in Madrid.

Contents: According to the announcement the show also included exercises of „white magic“, as well as the demonstration of card tricks and a fire-eating performance. Carreto, who is also introduced as professor of „máquina electrica“, as well as physicist and natural scientist in possession of „truths about nature“, could well have been a descendent of the Del Carrettos, a noble family of Liguria, which was part of the Spanish Habsburg Empire then.

Rarity: Of greatest rarity! OCLC/WorldCat, KVK, Google and viaLibri Libraries locate no copies at all worldwide, including Spain (CCPB, REBUIN). ABPC show no results at auctions in the U.S.A and U.K. since 1972. JBP, JAP and APO (since 1906) quote one auction result only (Germany 1973, this copy).