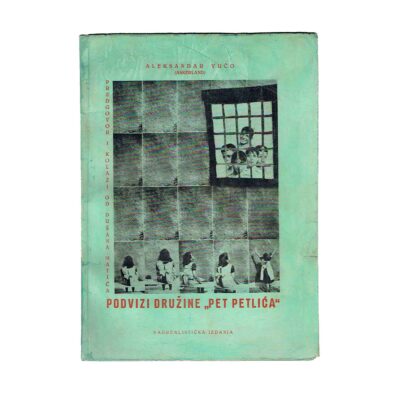 4to. Original publisher’s mint wrappers with collage and typographic title on front cover.

First edition of this marvellous and particularly rare Serbian surrealist children book, the single outcome of the prolific Belgrade surrealist group around Marko Ristić dedicated to the picture books genre for young readers and most importantly an outstanding example of Serbian avant-garde photomontage.

Contents, Illustration: The work consists of a novel in verse by Alexander Vučo telling the story of a girl and a group of five boys imprisoned in a monastery. The text is typeset with latin characters, a conscious and provocative act of modernity by the Surrealists in a traditionalist environment that insists on the Cyrillic alphabet.

Vučo also contributed photographs of his sons Đorđe and Jovan for the congenial collages of his surrealist companion Dušan Matić, who also incorporated drawn elements as well as photos of objects in his design. In the preface Matić also explains his idea and technique of composing those collages, “remarquables par leur beauté et la pureté des lignes” (Kapidžić-Osmanagić, p. 243).

Despite, or maybe because of the ambitious goal of this unique book project, which was to combine surrealist poetry with social-critical entitlement, »The Adventures of The Five Little Roosters Gang« later became very popular in former Yugoslavia, a number of new editions were published, and in 1982 Televizija Beograd even broadcasted a TV series after the plot of present book.

Condition: Former tears at spine, margins and corners as well as water stains at front and rear cover professionally restored, some pages slightly foxy particularly at margins and with slight traces of use, otherwise solid copy.

Rarity: Of outstanding rarity. WorldCat/OCLC, KVK and viaLibri Libraries locate only 3 copies of this edition outside former Yugoslavia (British Library (imperfect copy), Columbia and Stanford UL). JAP/APO and RBH show only 1 auction result for this outstanding surrealist work of literature and collage art.