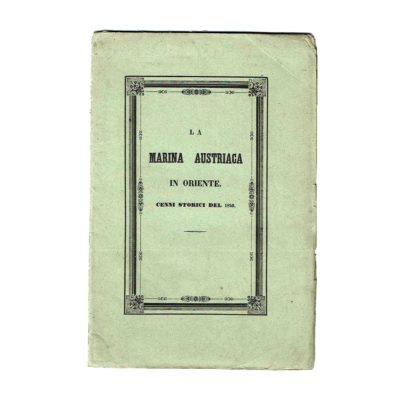 Original edition of this particularly rare account of an Austo-Italian „embedded“ journalist during the Oriental Crisis of 1840.

Contents: Cesare Vimercati, later to become an author of works on political and military history, took part in a military campaign of allied Austrian, British and French marine forces, which in 1840 ousted the self-declared Viceroy of Egypt, Muhammad Ali, from Ottoman Syria. As an „embedded“ journalist Vimercati sailed with the Austrian frigate »La Guerriera« under command of Archduke Friedrich Ferdinand Leopold. In present account he describes the course of events and combats during this so-called „Oriental Crisis“, passing by Constantinople, Alexandria, Beirut and Saida. Most prominently Vimercati reports the siege and bombardment of Acre in November 1840, for which reason he also contributes 3 detailed tables with the ship’s armament. Also included is an ode of victory titled „La Siria Ricuperata“ [Reconquered Syria], sung by the crew. The work was published by the Vienna Congregation of Armenian Mechitarist monks, who ran a printing house specialised on oriental affairs. Vimercati wrote his account in Italian, not only because it was his native tongue, but also because the language of command of the Habsburg marine forces in these days was Italian. Shortly after, in 1845, the Mechitarists also published a German version of present work.

Condition: The striking pictorial frontispiece, drawn by Albert Schindler and lithographed by H. Engel in Vienna, was not bound in this copy. Obviously a part of the small print run was issued without it (see also the digitalised copy of the Austrian National Library [ÖNB]). Title page verso with old library stamp, cover slightly stained, a few marginal tears at margins, book block with slightly and barely visible foxing, some corners dog-eared, otherwise well preserved.