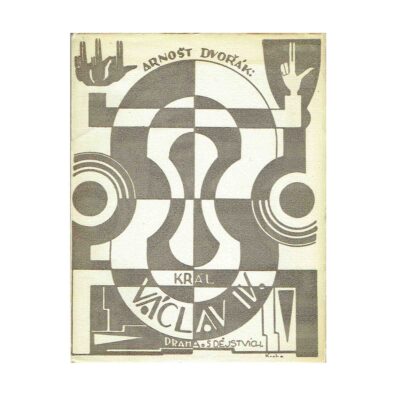 Contents: Play by Czech playwright, theater director and translator Arnošt Dvořák (1881-1933), well known for his historical themes and a pioneer of the so-called „mob drama“, with the principle role played by the crowds, rather than individual heroes. The 1st edition of this play was published in 1910, a 2nd edition only one year later, both covers of those editions being unspectacular.

Illustration: The cover design for preceded 3rd edition by Jiŕí Kroha (1893-1974), a Czech modernist architect and designer is all but this: probalby originally executed as ink drawing, he sketched the face of the medevial Bohemian king Wenceslaus IV in constructivist manner, clear structure and strong colour.

Reference: Not in Primus and Vloemans.