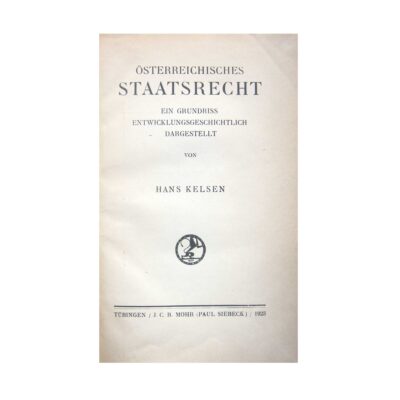 „Undoubtedly the leading jurist of the time“ (Roscoe Pound)

First edition of Hans Kelsen’s major case study about public law and its evolution, developed for his homeland Austria, that had become a republic only 4 years ahead of this publication. Kelsen had already drafted the constitution (1920) for this 1st Republic of Austria, an outline basically still in function today. After having to flee the Nazis in the 1930s due to his Jewish origin, Kelsen, nowadays seen as the world’s most important proponent of Legal Positivism in the 20th century, moved to the United States in 1940. There he became „undoubtedly the leading jurist of the time“, as Roscoe Pound, a leading American legal scholar and educator, pointed out. Among other profound achievements in legal, political and philosophical sciences Kelsen also decisively contributed to post-war International Law, e.g. applied in the course of the subsequent Nuremberg trials against Nazi war criminals (1947-49) and the legal framework for the United Nations Organisation (1950/52).