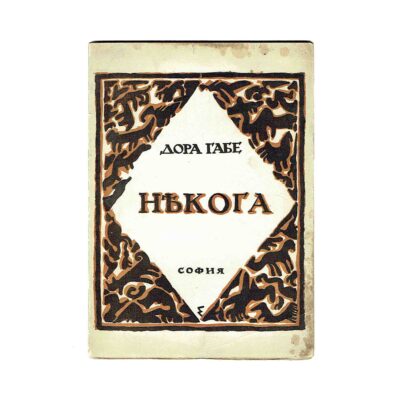 The world as a zoo, Sirak Skitnik’s thoughtful cover for Gabe’s »Nyakoga«, 1924

The stories told from a child’s perspective are considered an early example of progressive youth literature, which addressed children as equal readers.

Illustration: The vivacious cover alluding to the perception of the world as a zoo by Sirak Skitnik emphasises the author’s intention in a congenial way. »Nyakoga« was published by the influential Sofia publishing house of the magazine Zlatorog, whose co-editor was Sirak Skitnik. The latter also designed the logo of the publishing company which plays with the animal motif of the cover and is printed on the reverse of this volume (fig. 36.2).

Condition: Cover stained at margins and with some wear, otherwise fine whilst uncut copy.