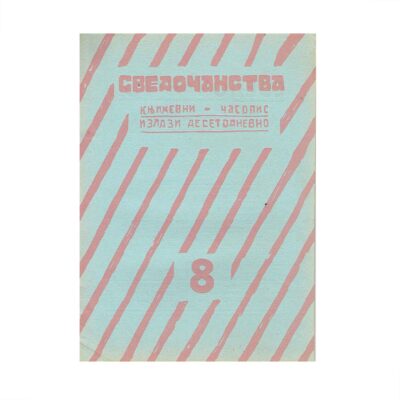 »Svedocanstva«, a pioneer magazine of Yugoslave Surrealism, with a drawing by Picasso, 1925

SVEDOCANSTVA [Testimonies]. No. 8. With the 1st printing of a drawing by Pablo Picasso. Beograd: 1st March 1925.

8th and in the same time closing issue of this first collective publishing adventure of the later Belgrade surrealists.

Contents: As the title of the review suggests »Svedocanstva« should deliver testimonies to the contemporary developments in Serbian arts and society but also abroad, containing poetry, essays, short prose, letters as well as documents. Printed in 1.000 copies each (nevertheless hard to find today in complete sets) the issues of this magazine document early established and close ties to the French surrealist movement, whose periodical »La Révolution surréaliste« is promoted in issue no. 1. Matić, a professor of philosophy and major theoretical proponent of the Belgrade movement, and the poet Moni de Buli later signed the French surrealist’s declaration „La révolution d’abord et toujours“ in 1925.

Altogether »Svedocanstva« shows a unity in message and artistical, literary as well as philosophical activity of the Belgrade surrealist group around Marko Ristić, Dušan Matić, Milan Dedinac, Mladen Dimitrijević and Aleksandar Vučo, as well as some affiliated progressive poets like Moni de Buli (Monny de Boully), Rastko Petrović and others and their relations the international avant-gardes.

Each issue of »Svedocanstva« is devoted to a single subject related to the „conditio humana“, present no. 8 is consistently treating the matter of „Paradise“. The rear cover of this issue incorporates a reproduction of a design by Picasso depicting a paradise scene with 3 nymphs, drawn by the artist on a post-card especially for and dedicated to the editor’s board of »Svedocanstva« and sent to Belgrade for free disposal.