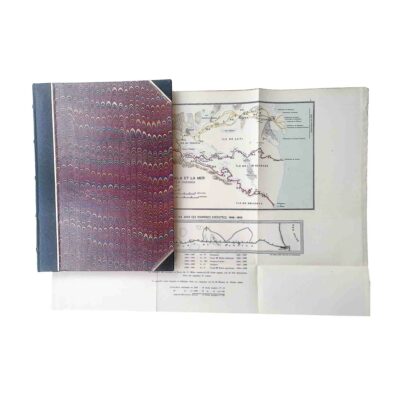 Only edition of this most comprehensive, illustrated and scarce documentation of making the Danube Delta navigable for international trade.

Content: The »Commission Européenne du Danube« (CED) had been established after the close of the Crimean War (1856) as a body of interest by the victorious powers (Great Britain and France in leading position), as well as riparian states of the Danube and the Black Sea with the aim to improve the navigability of the Danube Delta for military purposes and international trade. Present comprehensive documentation in French compiled by the Romanian statesman and later president of the Romanian Academy of Science Dimitrie Sturdza (1833-1914), summons all construction activity under the aegis of the CED until 1911 and according treaties as well as other acts in chronologically order.

Illustration: Numerous charts and tables, of which 15 on folded plates illustrate the efforts. Of particular interest is the large format chromolithographic map with a detailed few of the Kilija (nowadays Ukraine), Sulina and Sfântu Gheorghe mouths of the Delta.

Condition: 2 of the half-tone plates showing portraits of the Romanian king Carol I., Sturzda and others with traces of detachment, some pages with tears at margins and with minor foxing, otherwise very good, mainly uncut copy.

Rarity: Particularly scarce in trade. As of June 4th 2022 no copy available at the market. JAP/APO and RBH don’t quote copies at auction for the last 30 years.