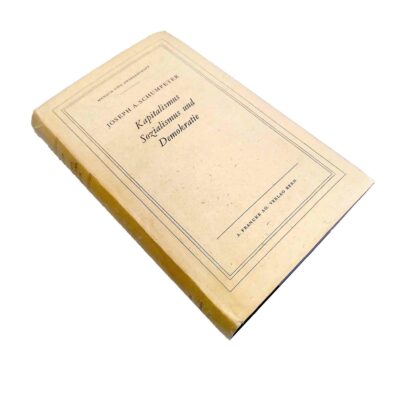 First German edition of this core work of Schumpeter about the „gale of creative destruction“ of capitalism and therefore inevitable rise of socialism, personal copy of Otto Molden.

Edition, Translation: »Capitalism, Socialism and Democracy« was first published in 1942 by Harper & Brothers in New York and is considered the most famous and yet controversial work of the late Schumpeter, wherein he claims that the creative-destructive forces unleashed by capitalism would eventually lead to its demise as a system and consequently to the rise of Socialism. The German translation of the book was done during the summer months of 1945, and as postal traffic was still heavily restricted shortly after WWII, Schumpeter, despite being a German native speaker on his own, delegated the supervision of the translation work to his German colleague Edgar Salin, then residing in Switzerland.

Provenance: Austrian publicist, federalist and founder of the European Forum Alpbach, Otto Molden (1918-2002), signed by Molden on the front end paper recto and p. 13, and with some pencil underlinings.