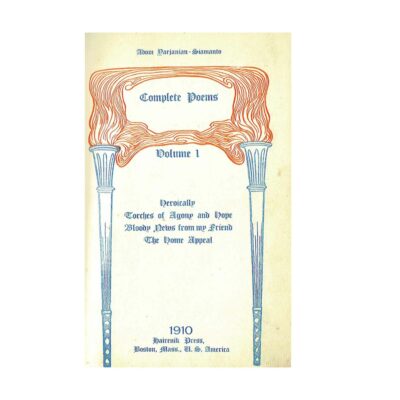 First and particularly hard to find edition of this edition with complete poems by Armenian poet and activist for Armenian independence Atom Yarchanian, called Siamanto (1878-1915).

Author, Content: From 1897 onwards Siamanto spent most of his adult life in political exile, mainly in Paris, Switzerland and other European cities, where he propagated the Armenian cause and in particular the suppression of and ongoing atrocities against Armenians living in the Ottoman Empire. He did so mainly by writing and partly publishing a corpus of poems, nowadays seen as also having modernised Armenian literary language. In 1910 Siamanto settled in the U.S., where he worked for the »Hairenik« newspaper, an Armenian weekly published in Boston. There he also had this fist edition of his collected works published, the cycles „Bloody News from my Friend„ and „The Home Appeal“ also being first printings. Heading back to Constantinople to support the Armenian cause, Siamanto was among those intellectuals arrested, tortured and finally murdered by the Ottoman authorities during the Armenian Genocide of 1915.

Condition: Armenian title leave is missing, the English title leave, bound in originally after the Armenian one, is present (see e.g. the copy of UCLA digitalised by Google for comparison); front joint at top end of spine slightly damaged, cover at edges, corners and joints partly worn, 3rd front endpaper with tears.