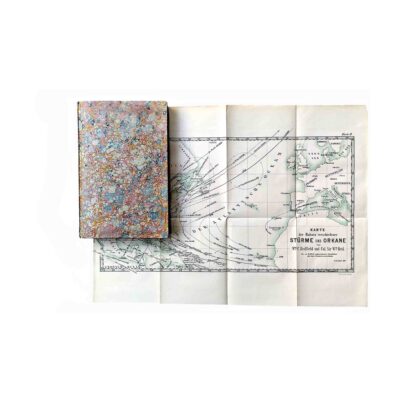 Illustration: The „storm maps“, partly in large format, depict patterns of storms and historical occurrences. They were skilfully engraved in 1871 by C. Griebel for the use of German navy officers and also commercial seafaring. 2 plates show a range of brightly lithographed colour drawings of solar prominences by prominent astrophysicist Johann Karl Friedrich Zöllner. The drawings were made in 1869, when Zöllner observed several solar prominences using a particular telescope he designed himself. With this „photometer“ as Zöllner named his invention, he would also be able to measure the sun’s magnitude with unknown accuracy. Zöllner’s discoveries were „pivotal for astrophysics – leading to the discovery that star’s brightness varies wildly among different stars, and also that the Sun is brighter than the vast majority of nearby stars.“ (Wikipedia).