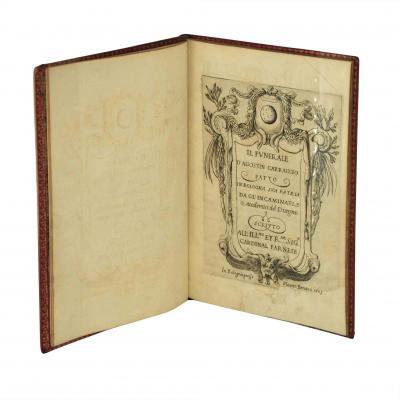 The only authentic book about the Bologna »Academy«, with etchings by Guido Reni, 1603

One of only two books illustrated by Guido Reni, a most important Italian Baroque artist of the Bolognese School, in the same time according to Thieme/Becker the only authentic document which we possess about the »Accademia degli Icamminati« (Academy of the Newly Embarked, or Progressives), a most remarkably Bologna artist’s circle whose major work was to fresco the Palazzo Farnese in Rome.

Illustrations: The spirited and delicate drawings and engravings with some etching of Reni are depicting 18 pictures of temporary, mostly allegoric and emblematic decorations (among them 4 rebuses) realised on occasion of the memorial service for his friend and co-member of the Bolognese circle, Agostino Carracci (1557-1602), held on January 18th 1603. Reni was inspired by works of the deceased and by paintings of his most prominent students, i.e. Alessandro Albino, Giovanni Battista Bertusio, Aurelio Bonelli, Francesco Brizio, Giacomo Cavedone, Agostino’s cousin Ludovico Carracci, Baldasarre de gli Alvigi, Ippolito Ferrantino, Lorenzo Garbieri, Lucio Massari, Giulio Cesare Parigini, Sebastiano Rozali, Lionello Spada and Giovanni Luigi Valesio. Additionally to Reni’s exceptional illustrations a large plate shows etchings of 2 Doric columns situated on the front and rear side of a mausoleum constructed by the »Academia« in honour of Caracci. The underlying drawings and etchings for this plate are attributed to Francesco Brizio, as is the engraved and partly etched cartouche for the title page after a design by Ludovico Carracci.

Content: The main text of this publication, written by Benedetto Morello, is dedicated to patron of arts cardinal Odoardo Farnese, who between 1597-1600 had commissioned Agostino Carracci to assist his brother Annibale, Reni and other members of the Bolognese Progressives to fresco the Palazzo Farnese in Rome, one of the world’s most famous Renaissance and Baroque palaces. It contains a description of Carracci’s funeral and explanations of Reni’s and Brizio’s accompanying illustrations. Furthermore Lucio Faberio, since 1599 notary of the Bolognese colony of painters, delivered a funeral oration. Finally several poems in honour of the deceased by eminent poets like Cesare Rinaldi are also included.

Binding: Around 1860 present copy has been skilfully bound in a truly splendid ruby red morocco with rich gold tooling. Originally published in 4to, the book-block then was cut to 19:12 cm to fit this binding. Nevertheless margins are still wide.

Rarity: Though not particularly rare in institutional holdings this important document of Italian Baroque art documentation very rarely appeared on the market at least since the early 1800s. Bartsch and Ciocognara already concede it’s rarity around 1820. So does Leipzig antiquarian Weigel in one of his catalogues in 1843. ABPC (1972ff.), Drouot (2004ff.), Jahrbuch der Bücherpreise (1906-38), Jahrbuch der Auktionspreise (1950ff.) and Auktionspreise online (ca. 1988ff.) don’t show no auction result at all.