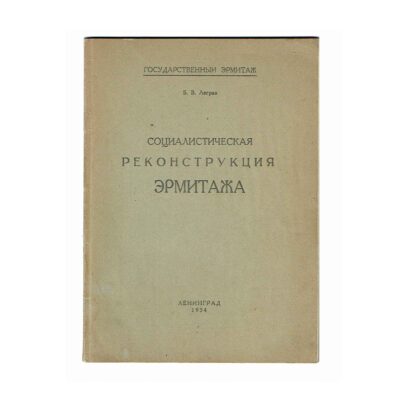 Re-Organisation of the Hermitage according to Socialist principles, 1934

First edition of this extensive photo and text documentation with a „Socialist reconstruction“ of the Hermitage’s permanent exhibition under the responsibility of Boris Legran, the museum’s director between 1931 and 1934.

The new exhibition was launched in 1932, a selection of the Hermitage’s collections was presented „in keeping with the new [socialist] principles of the country’s life and new policies“. Legran interpreted works of art of the pre-socialist era (for instance, the Fabergé jewelry) as evidence for decadence and oppression during the Feudal aristocracy. In the years before this re-organisation Legran had been active in secretly selling thousands of highlights of the museum’s collections abroad, including masterpieces by Jan van Eyck, Titian, Rembrandt, Rubens and Raphael among many others. The works were mainly purchased by Andrew W. Mellon, a billionaire from the U.S. – The catalogue was also published in French language and was printed in 2000 copies only.

Wrappers with very slight traces of use, rear side of front cover with a remark made with colour pencil, all captions with extensive pencil remarks containing German translations, generally a well preserved copy.