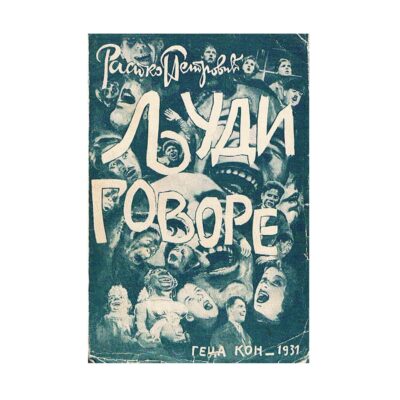 First edition and a declared example of Petrovich’s „automatic writing“ inspired by Surrealism which was at its climax in Belgrade in the beginning of the 1930s. The author writes in his foreword: „I jotted down the first words that came to my mind in a bistro that very moment, on a piece of paper bought at the tobacconist’s across the street“. Rastko Petrovich (1898-1949), who between 1935-49 also settled in the the US (Chicago, Washington DC) as part of the Yugoslavian Corps Diplomatique, is considered to be one of the most gifted and authentic modernist Serbian writers, artists and photographers and his contributions can be found in all major avant-garde periodicals and other publications at that time (e.g. »Putevi« (Paths, 1922/23)»Svedočanstva« (Testimonies, 1924-25), Almanac »Nemoguće« (The Impossible, 1931), »Nadrealizam danas i ovde« (Surrealism here and now) 1931-32). Between 1921-31 he also had 4 books published that are seen as core publications of Serbian Expressionism and Surrealism, one of them being the preceding.

Furthermore Petrovich’s striking photomontage cover for this book is one of the very few examples of this technique in the realm of the Serbian avant-garde.

Bottom of spine professionally restaurated, back side of cover with little ink staining; front paper with contemporary handwritten, dated and signed dedication or owner’s remark, one stamp of a Belgrade school and another stamp of the publisher Geca Kon; otherwise inside very fine, printed on machine-mould paper.