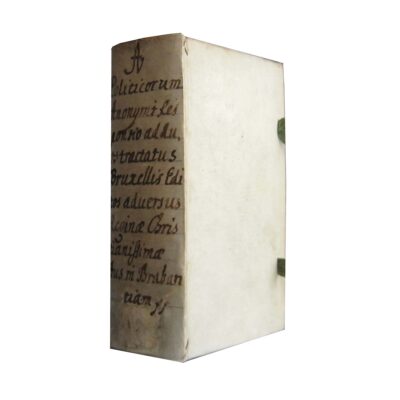 Anonymously published legal treatise, in which the author, French historian and advisor to the court Guy Joly (died 1678), due to the marriage of Louis XIV with Maria Theresa of Spain claims the Spanish Netherlands for France, who’s armies had occupied the territory in May 1667, hence starting the War of Devolution (1667-1668). Jolys text is a reply to two works published in the same year by Belgian expert Pierre Stockmans, in which this region, mainly modern-day Belgium and Luxembourg, is said to belong to the Spanish Habsburg Empire. The engraved printer’s device on the title page is a consciously midleading indication, the book was probably printed in the Netherlands (see remark to the copy of the BnF).

ABPC online shows no auction records for this title since 1972.