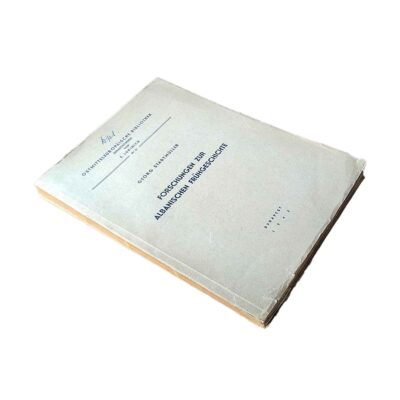 Contents: In this book, his seminal habilitation thesis, Stadtmüller proposed a controversial thesis on Albanian ethnogenesis, after which the origin of Albanians can be traced back to the region of Mat. Contained are accounts on the history of Albanian settlement, on Albanian history in pre-Roman times, the Roman and early Byzantine period, as well as the early Albanian epoch (ca. 600 – 1018). Furthermore contributions about the first sources of Albanian presence (11th to 13th ct.) and the term „Albanian“ are also included.

A comprehensive bibliography and an index of names and subjects are attached at the end of the volume. Present account was originally published in »Archivum Europae Centro-Orientalis«, year VII (1941). A 2nd edition of this book, enlarged and with 2 folded maps, was published in 1966.