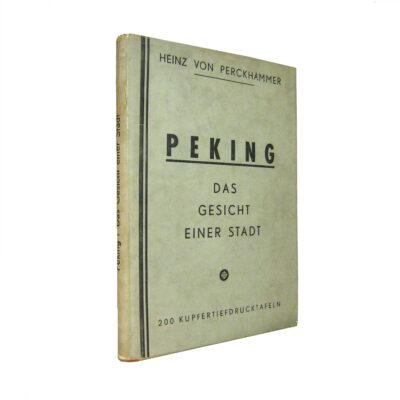 Rare 1933 imprint of this stunning photo book about Beijing in the 1920s, complete with the often lacking typographic dust wrapper.

The book was originally published in September 1928 in a differing design, which is nevertheless easier to find on the market nowadays: blue or olive cloth and neutral soft cover respectively, covered with a pictorial dust jacket and protected in a slipcase. – Perckhammer (1895-1965), who derived from a Tyrolean family of photographers, spent some years documenting China with his camera during the 1920s. He instantly became renown in 1928, when 2 volumes with photogravure prints of his photographs were published: »Edle Nackheit in China« [Noble Nudity in China], showing carefully posed Chinese nudes, many taken in Macao brothels, as well as the present work of Beijing street scenes. Contemporary critics stated that Perckhammer with his photographs had achieved to conserve an old Beijing, that was about to disappear behind the façade of a vastly growing modern metropolis in those days. He later operated his own studio in Berlin and served as a war photographer attached to Waffen-SS.

The pictures, clear and sharp but sometimes also soft-toned, show plenty of inhabitants posing or following their daily routines, a quite unusual perspective compared to other books of the »Gesicht der Städte«-series or comparable editions of photo-books (e.g. »Orbis Terrarum« by Wasmuth), where photographers mainly focussed on landscapes, architectural sights and details of buildings. Each illustration has captions in German, English, French and Spanish.

Arthur Holitscher’s insightful foreword (before p. XV) is missing in this copy, which is however complete, as bound by the publisher’s bookbinder like this. Dust wrapper with some old repair of tears, slightly torn at edges, occasionally minimally torn and creased, otherwise very well preserved copy indeed.