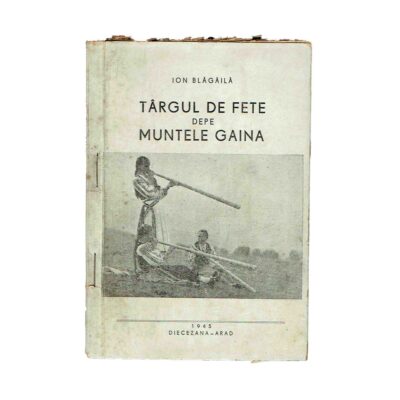 Rare coverage of former maiden fair in the Romanian mountains

Early and rare coverage or this archaic custom, founded by mountain families from the areas surrounding the Apuseni Mountains in the northwestern of Romania to arrange weddings for their unmarried children. Until today this event takes place on the 3rd Sunday of July at so-called Mount Găina (also called „Mount of Love“, 1486m). Traditionally the event started Saturday evening with a gathering of boys and men drinking and singing all night. At dawn wives and daughters joined, the latter with a valuable dowry collected over the years and presented with beautiful carved chests. The girls then were required to dance to prove that they were not lame. Merchants sold food, drinks and white goods. The climax arrived when future brides were presented by their parents by offering food and drinks to young men and their fathers. “Negotiations” began… First documented only in 1816 and elaborately described in Hungarian writer Mór Jókai’s novel »Szegény gazdagok« (The Poor Rich, 1860), »The Maiden Fair of Mount Găina« started to change in the 1950s, shortly after this documentation was published. Nowadays the event is more of a folk festival and a foclor market, mainly for tourists.

This copy bears a dedication by author Ion Blǎgǎilǎ for a colleague ethnograph on the first title page recto, localised and dated: „Arad, 27. VI. 947.“

Cover in parts foxy, paper time-stained, otherwise well preserved copy of this curious and particularly scarce documentation, only the 2nd of its kind and probalby the first with ethnographic photo material included. OCLC and KVK show only one copy worldwide in institutional holdings, at the Timişoara University Library.