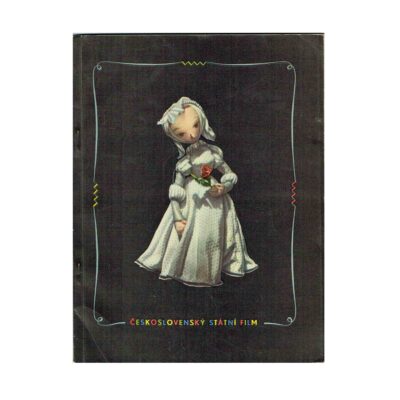 PANORAMA OF [CZECHOSLOVAK] PUPPET FILMS. With over 100, partly full-paged reproductions of film stills, where of 30 coloured. S.l. [Prague]: 1956.

Comprehensive though concise survey covering the first heigth of Czechoslovak puppet film production for foreign readers in English, French, Spanish and German. Richtly illustrated with ober 100 reproductions of film stills, many of them coloured and full-paged, as well as photo portraits of film-makers and making-of settings, this rare publication contains accounts on life and works of Jiří Trnka (11 movies, e.g. „The Good Soldier Shweik“ and „Cirkus Hurvínek“), Břetislav Pojar („A Drop Too Much“ and „A Journey into the Primeval Times“), Karel Zeman (e.g. „Inspiration“, a film made with glass figures), and Hermína Týrlová (e.g. „Goldilocks“ and „The Misifi“). The appendix shows a table of international prizes won by Czechoslovak puppet films and and index of all 24 covered movies.