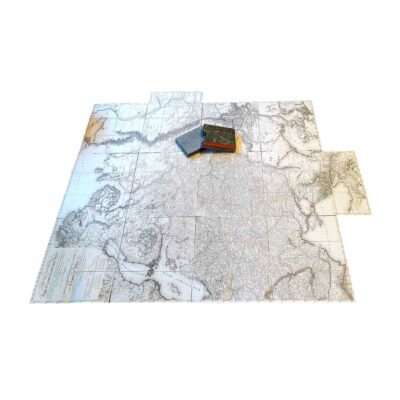 Rare and highly detailed engraved map of Western Russia on the eve of Napoleon’s invasion, 1812

Rare and highly detailed map of Western Russia from the Baltic to the Ural Mountains and the Caspian, published in large size by Tranquillo Mollo, one of Beethoven’s early Vienna publishers, on the eve of Napoleon’s invasion of Russia in 1812.

Content: Present hachure map was drawn by Russian cartographer Ivan Danielov (or Danilov) „according to the latest astronomical localisations, the large atlas and other maps of the Russian Imperial Map Depository, divided into governorates, with borders according to the last peace treaties, furthermore mentioning the postal roads and other main roads also quoting the distances between locations.“ (subtitle). It was printed and edited by Tranquillo Mollo, a Vienna based company specialised in engraved views, maps and sheet music, who in those years also functioned as one of Beethoven’s earliest publishers.

Danielov’s map „may have appeared just in time to be offered as ‚theatre of war‘ in connection with Napoleon’s Russian campaign. This map, which covers the area between Danzig and Tobolsk and between the Kara Strait and Armenia respectively, presents, as a contemporary review puts it, ‚without being overloaded […] all of the considerable places, mountains, rivers, lakes, etc. of the Russian Empire and the bordering parts of it with great detail, and is rightly preferable to all previously published theatres of war, since for its other completeness it includes Astrakhan and Tobolsk, whereas the latter often do not even go as far as Moscow, and is therefore to be recommended as a very useful aid to anyone who wants to follow the history of the present war'“. (Dörflinger)

Rarity: Particularly scarce in present fresh condition, JAP/APO and RBH quote only 3 copies at auction since 1950, of them with the outline map.