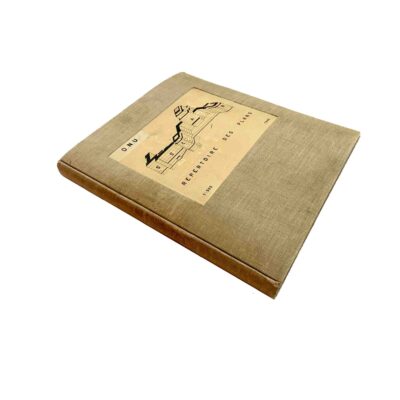 34:27 cm. 65 unilaterally printed leaves with numeric index tabs (numbered 1-63, where of one with 2 tab numbers + 2 not numbered leaves), bound in between 5 corresponding cardboard dividers with index tabs according to building numbers A, B, C, S1 and S2 (Secretaries). Hectographs of ink drawings, partly mounted and with hand-written annotations. Original light grey cloth with inlaid and mounted pictorial cover title.

Probably unique inventory for internal use by U.N.-officials with hectographic reproductions of reduced copies of all original plans drawn until 1945 in the scale of 1:100 for the construction of the Geneva »Palais des Nations«.

Content, Illustration: The monumental »Palace of Nations« had been planned on behalf of the »League of Nations«, predecessor of the U.N., by architects Julien Flegenheimer, Camille Lefèvre, Henri-Paul Nénot, Carlo Broggi and József Vágó. This group of 5 buildings was finally constructed between 1929-1938. In those days the »Palace« was the second-largest building complex in Europe after Versailles. As stated in the preface, aforementioned original construction plans were redrawn in the scale of 1:500 and published with this hectographic repertory, mainly for internal use by the U.N.-administration, that started to moved in 1946.

Included are two folded maps depicting the seatings of the Assembly Hall and the Council Chamber in great detail.

Our copy bears hand-written annotations and sketches for extensions drawn and written with pencil and colour pencil. Eventually, on behalf of the U.N. three floors were added to one of the buildings and another building was extended between 1950 and 1952.