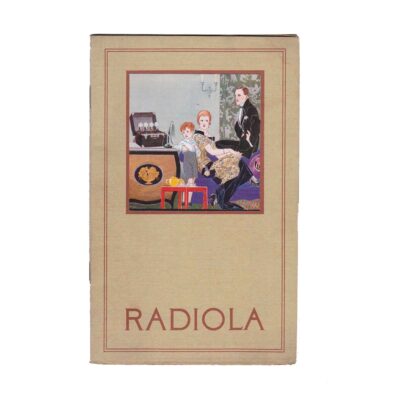 Probably the first ever published French catalogue with radio sets, accessories and spare parts, illustrated throughout and exceedingly rare. »Radiola« was founded in November 1922 as an enterprise of the »Société française radio-électrique (SFR)« founded and managed by French radio pioneer Émile Girardeau. The company produced the first radio sets available for French households (the cheaper »Radionlina« model, nos. 1 and 2, the medium »Radio Standard« and the luxury model „Radiola“) and was also running the first private radio station in the country, starting its program on Nov. 6th 1922. In 1924 the station became later state owned „Radio-Paris“.

From the very beginning »Radiola« was also active in publishing. In November 1922 the 1st no. of „Le Radiola“-magazine appeared and in 1923 followed this brochure, which probably represents the 1st ever produced catalogue promoting radio sets for sale in France. The catalogue is also remarkably well designed. Printed on glossy paper with modern type-setting and high-quality photo reproductions, it is covered with wrappers made of thick machine mould paper. The front cover incorporates a tipped-on chromolithographic plate with a gorgeous Art Deco-motif by René Vincent (who fully signed the plate). It shows a family listening to the radio via a »Radio Standard«-model of Radiola.

An important document for French radio history this item is of outstanding rarity, no copies available on the market, nor is any copy in institutional holdings worldwide according to Google, WorldCat and KVK. Sudoc and BnF also show no records.