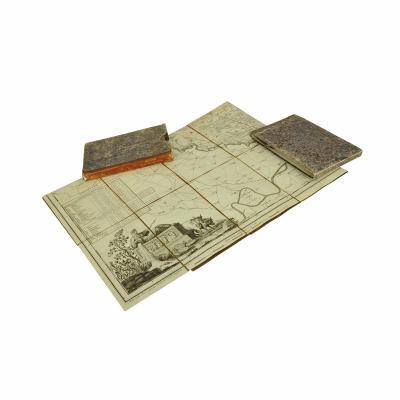 1st map of the provinces of Milano and Pavia together, 1819

Important and particularly rare map, on which the Lombardic provinces of Milan and Pavia are depicted together for the first time.

Contents: The engraving of the map was initiated by the Habsburg authorities, new rulers of the Kingdom of Lombardy–Venetia since the Vienna Congress of 1815, in need of an accurate and up to date cartographic presentation of the region that included many new streets and channels constructed in the years before under the surveillance of Carlo Parea, general inspector of water ways and roads. The publication of the map was announced on July 15th 1819 in »Gazzetta di Milano«: „An exact topographic map of the provinces of Milan and Pavia, which has long been desired, will be published at the end of the month by the company Pietro and Giuseppe Vallardi in a large papal sheet (…) it was entirely formed after the precious reduced map of the entire state [i.e. »Carta topografica del Milanese e Mantovano…«, 1788-1796], outlined and engraved by the famous astronomers of the I. R. Observatory of Milan [i.e.: Angelo De Cesaris, Francesco Reggio e Barnaba Oriani] (…) and the publishers have neglected nothing, because it was engraved with greatest clarity, so that there can be distinguished postal stations, customs offices at borders, and the condition of the land, such as meadows, valleys, rice fields and forests.“

Rarity: According to WorldCat, KVK and viaLibri Libraries only 3 copies are traceable in institutional holdings worldwide, at the National Libraries of Austria and Greece as well as at the Zentralbibliothek Zürich (this copy is outline coloured); none is recorded in Italian libraries according to these sources. Google finds 2 additional historical records: one in the personal library of Francis I of the Two Sicilies (quoted in: Catalogo di libri appartenenti alla biblioteca privata di S. M. Francesco I. (…). Napoli: Trano 1825, p. 54) and another one in the holdings of the British Royal Geographic Society (The Journal of the Royal Geographical Society of London: Vol. 26 (1856), p. xcvi).