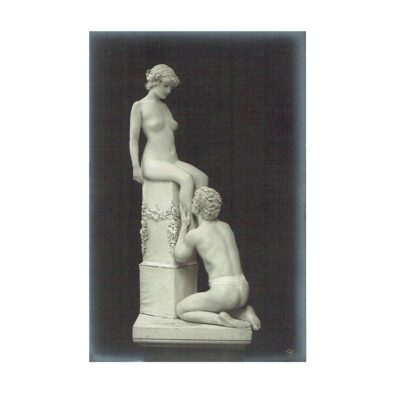 Desmond was one of the first female performers who promoted motion nudity on stage as a means of aesthetic expression, and was therefore heavily oppressed in conservative Prussia, where public performances only of rigid bodies, e.g. as imitation of famous ancient classical sculptures, were morally accepted. Starting in 1908 she and her male partner, the athlete Adolf Salge, performed scenographed series of »living pictures«, often complemented by dance movements and supported by music. These so-called »Evenings of Beauty« (Schönheits-Abende) took place in the Berlin Neues Schauspielhaus, as well as in other German cities like Leipzig and Breslau and even in St. Petersburg. Of great popularity, well covered by the media and the cultural industry (even postcards were produced) as well as documented by this series of photographies for sale, those events were nevertheless prohibited severals times, because Desmond and her partners usually posed and moved nude, wearing only body-paint. But her reputation as a cultural (and also early feminist) trouble-maker was also a good business opportunity. Desmond even sold cosmetic products carrying her name, thus being a predecessor of Salma Hayek, Eva Mendes and the like.

Known sets of this series usually contain 11 photographies, whereof the 1st is a dressed-up portrait of the actress and the other 10 show »living pictures«. Sometimes the prints were tipped on the photographer’s (Hofphotograph Skowraneck) printed grey boards that also incorporate captions like „Adoration“, „Venus Anadyomene“ or „Flirt“. Other sets only contain the plain silver bromide prints not tipped-on, like the preceded. Originally also a sheet with 4 ornamented pages of introducing text by Max Thieler was attached. Preceded set lacks this attachment and the introducing photo portrait of the dressed Desmond, both are reproduced in good quality. However it contains a bonus of two prints with motives showing the performer with a veil, unknown to the other sets. All photographies bear the stamp of „Neue Photographische Gesellschaft“.

Photographies with silver margins, boards of map slightly foxy, former owner’s name on front cover and inside, flaps with some minor tears, generally a fine and rare set.