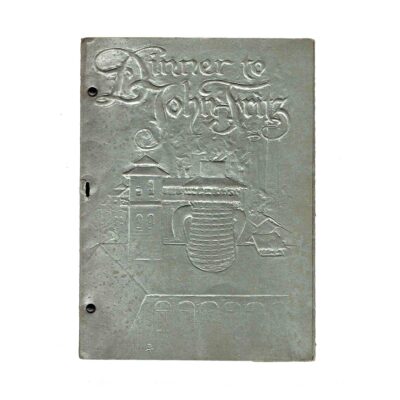 Original dinner menu on the occasion of the 1st bestowal of the John Fritz medal, 1902

30:22 cm. 2 lithographic plates on mould paper, illustrated and with calligraphic text, incorporating the photographic portrait of John Fritz. Original cardboard cover laminated with metal foil, blind stamped illustration on front cover and gilt printing of the John Fritz medal (front and rear side) on back cover, bound with 2 (removable) metal screws and nuts.

Original menu card for the celebration dinner at the Waldorf Astoria Hotel in New York, on the occasion of John Fritz’s 80th birthday and the 1st bestowal of the »John Fritz medal«, awarded annually since 1902 by the American Association of Engineering Societies for outstanding scientific or industrial achievements.

The menu is personally signed by John Fritz, who also was the 1st recipient of the medal.

Design: Present menu card was designed by Thomas A. Sindelar (1867-1923), also bearing his signature on the cover (blind stamped monogram) and on one of the plates (printed full name). Sindelar, an illustrator and designer of Bohemian origin had studied in Paris, presumably with Alfons Mucha, before he settle in the U.S. He remains best known for his elaborate, allegorical and symbolic designs for menu cards, e.g. for the »Lotos Club«, a New York men’s group of distinguished professional, literary, and academic pursuits.