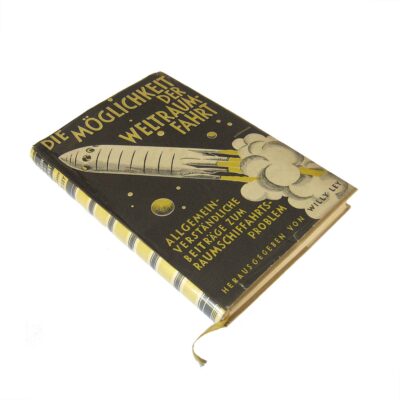 „One of the fundamental books in the history of flight and rocket design“, 1928

First edition, first printing of this pioneering collection of papers on the possibility of space flight, „one of the fundamental books in the history of flight and rocket design.“ (Interlibrum).

With the intention to popularise the idea of travelling the space the anthology assembles 10 scientific, though easily comprehensible texts by astronomer, physician and science writer Willy O. O. Ley, co-founder of the German »Verein für Raumschiffahrt« (VfR, Society for Space Travel) and other members of this society, most notably physician Hermann Julius Oberth, a pioneer in rocket research, who already had designed a rocket in 1917. In 1935 due to his Jewish origin Ley had to flee the Nazis and emigrated to the U.S., where he became one of the most influential researchers and spaceflight advocates. Oberth, on the other hand, contributed to the development of the V2-rocket alongside with Wernher von Braun in the early 1940s.

Dust wrapper at edges with some very minor tears and wear, otherwise well preserved copy of this core book about the subject, very hard to find with the original jacket.