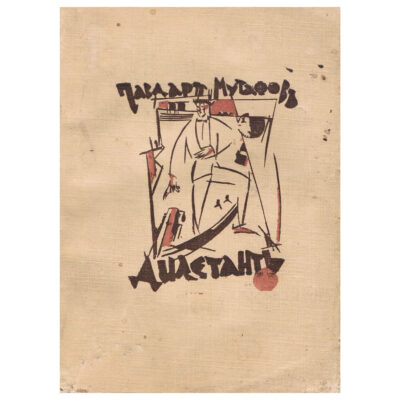 First edition of this polemic novel, the inspiration for which Mutafov found in Carl Einstein‘s early expressionist novel »Bebuquin or the dilettantes of wonder« which he had read in Franz Pfemfert’s magazine «Aktion« in 1912.

Content, Illustration: »Dilettante« appeared in the publishing house of the literary circle »Strelets« which was led by Mutafov and also published an short lifted avant-garde magazine with the same name. Again painter and co-founder of the Bulgarian modernist »Native Art Society« Dechko Uzunov proved to be a master of 1920s progessive cover design: his water-coloured pen drawing showing the protagonist is sparingly constructed and surrounded by reduced typography, but has nevertheless strongly expressive lines.

The red point is a visual quote of Lissitzky’s red circle and the cover design for the programmatic poem »September« (1924), written by Geo Milev, the Bulgarian avant-garde movement’s leader and publisher of the magazine »Plamak« (1924-25), to which Uzunov also contributed.

Condition: Cover very slightly worn, paper minimally time-stained, otherwise bright copy of this hard to find item. Outside Bulgaria only two copes worldwide is traceable according to OCLC and KVK, at SBB-PK and Biblioteca Salesiana in Pisa (Italy).