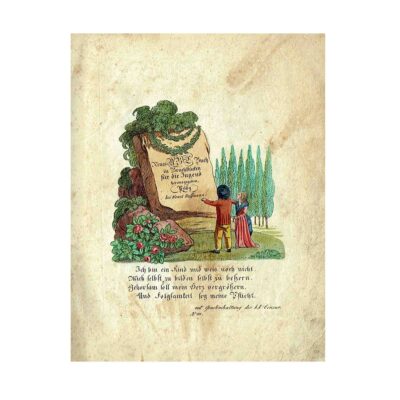 Contents, Illustrator: The author, illustrator and printer of this outstanding ABC-book, Prague based engraver Wenzl (or Václav František) Hoffmann (died 1858), was specialising in primers, as indicate 2 similar publications in those years (»Neues A-B-C-Büchel« from ca. 1820, with captions in German, Latin, French, Italian, Hebrew and Czech; »Neues deutsches ABC Buch« from 1827, with captions in German and Hebrew, each accompanied with two lines of German verse).

Condition: Spine of wrappers, some small faults at corners and tear in leaf 10 professionally restored, foxy throughout, however mostly at margins. The engravings are well printed and with bright and fresh colours.

Rarity: Present alphabet book is of outstanding rarity. WorldCat, KVK and viaLibri Libraries quote no institutional holdings at all and there is no auction result available in Europe, UK and the US whatsoever.

References: Not in Teistler and not in Wegehaupt; Chyba, Dictionary of Bookbinders in Czechoslovakia from the Earliest Times to 1860, vol. 1 (1966), cit. WBIS/CSBA (Hoffmann).