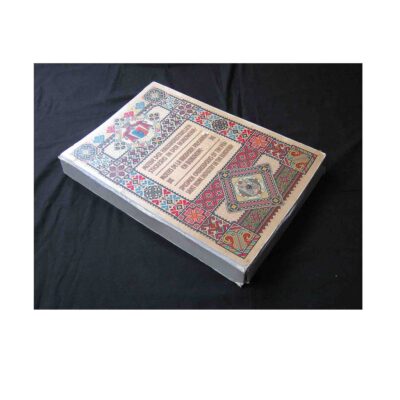 Monumental portfolio about embroidery in Bukovina, 1912

Contents: Erich Kolbenheyer, then Director of the State Industrial School in Chernivtsi, travelled the territory nowadays parted between Ukraine and Romania for years, and there collected, drew, arranged as well as commented hundreds of embroidery designs mainly from the Romanian and Ruthenian (Ukrainians) peasant population. Foreword, all captions and an extensive index of plates in German, French and English, the index also with Romanian and Ruthenian (Ukrainian) derivations.

Present is the international edition of this monumental work. A local variant was published with texts in German, Romanian and Ruthenian (Ukrainian) and in half leather with gilt spine imprint. In 1974 a reprint was published.

Condition: Clamshell box at edges and corners partly bumped and with tears, boards in parts worn, one flap with repair, some sheets and plates with minor tears and time stained.