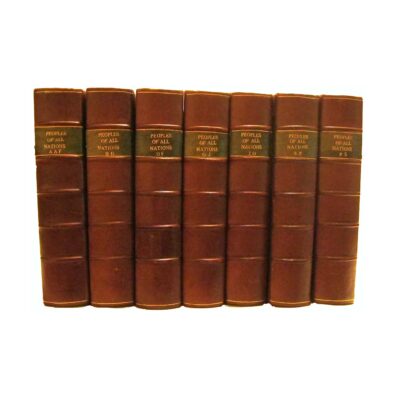 Rare complete set of this outstanding work of reference of truly global scale, a comprehensive, profusely illustrated survey about the world’s known ethnic communities in human history, with a special focus on their contemporary life around 1920.

Contents: Edited by J. A. Hammerton, „the most successful creator of large-scale works of reference that Britain has known“ (Oxford Dictionary of National Biography), the encyclopaedia is structured in alphabetical order according to the countries the ethnic communities described where living during the documentation was made. Though the majority of texts are written out of a (British) colonialist perspective and the pictures mainly appear too idyllic (in terms of folklore and rural life) and arranged, often revealing sexist or even racist attitudes, this exceptionally rich collection shows a tremendous ethnography variety, nowadays probably lost forever.

Edition: The series was originally supplied as a 7 volume set with varying publisher’s gilt embossed and colour illustrated cloth covers and, at least partly, also with colour illustrated dust wrappers. A 2nd edition followed in 1934, published as a series of 60 issued with illustrated covers. Preceded set of the 1922-24 first edition was bound in a solid and simple private half-leather binding; title pages and illustrated frontispieces where not bound in.

Condition: Leather parts of covers in parts slightly worn and with some scratches, otherwise well presevered copies, scarce in sets with all 7 volumes published.