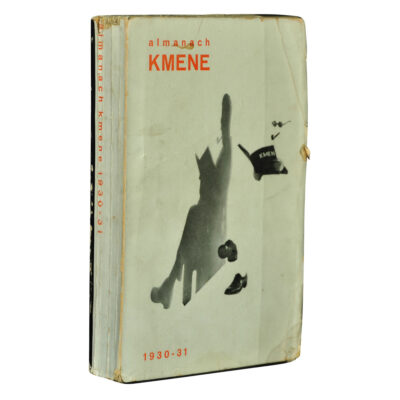 First of nine legendary regular yearbooks covering the production of most of the Czech modernist literary scene in the 1930s, edited by the prominent writer, scholar and university professor František Xaver Šalda. Published by the »Association of Modern Publishers«, an collective of the leading progressive publishing houses like Aventinum, Borový, Družstevní prace, Odeon and Symposion the »Almanach Kmene« was designed by the main protagonists of Czech avant-garde art, preceding 1930/1931 edition by Karel Teige. Apart from an anthology containing of excerpts of forthcoming publications, a list of member firms, their new releases, this volume is highly remarkable mainly because of Teige’s sober though effective design as well as his surrealist cover illustration, and also because of Sudek’s impressive photo portraits. After having published seasonally until 1937/38 the yearbook did not appear during the Nazi reign and reappeared with a last edition in 1948. In 1949 the »Association of Modern Publishers« was dissoluted by the Communist regime.