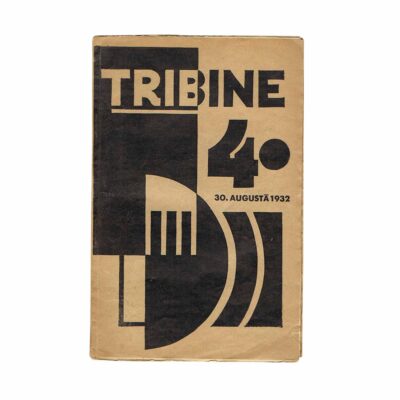 Issue no. 4 of this 2nd year of »Tribīne«, one of the most influential Latvian communist avant-garde magazines. »Tribīne« was published between 1931 and 1933 in a total of 12 issues (1st year: nos. 1-4, 5/6; 2nd year: nos. 1-4; 3rd year, no. 1-2). The magazine was repeatedly confiscated, it’s first chief editor, Jānis Bušs, went to prison. Preceded issue contains text contributions by Linards Lāicens, Emīls Fross and Pēteris Zars. Other authors were signing with monograms, pseudonyms or not at all, to prevent troubles with the authorities. Alongside the confiscation of the latest two issues in July 1933, publisher Lāicens had to flee Latvia and settled in the Soviet Union, where he felt prey to the Stalinist political cleansing in 1938. As far as illustrations are concerned, this volume contains a striking title-page showing a photomontage by Latvian and Soviet avant-garde artist Ernest Kāļis. Kāļis also designed the cover of all issues of »Tribīne« (except year 3, nos. 1 and 2) and his striking constructivist lino-cut transports a clear but nevertheless autonomous reference to Lajos Kassák’s »Bildarchitektur«.

Paper time-stained, front cover and first 3 leafs with one small tear, otherwise fine copy of this fragile and particularly rare magazine. OCLC and KVK show no holdings of this issue worldwide, though there is one in possession of the Latvian national library. MOMA, The Frick Art Reference Libary (New York) and Waseda UL only have copies of issues nos. 1 and 2 (1931) and/or 2,3 and 5/6 (1932).