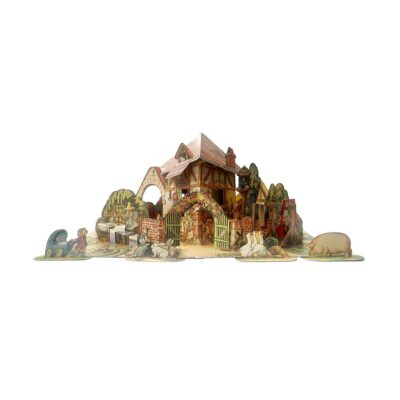 Early panascope by the Czech pioneer and master of the three-dimensional book Vojtěch Kubašta, here in the particularly rare original CSSR edition.

Edition: Present edition of this classic of paper engineering was published as a folding card of 2 flaps, with the publisher’s number „202/5“ printed on the rear flap. According to Opus V.K. (the bibliography provided by Kubašta himself) the first edition of his »Farma« (The Farm) had been published by Artia as a folding card of 3 flaps already in 1958, and included an illustrated textbook of 8 pages, bound in before the actual panascope. In 1961 the British collaborator of Artia for foreign editions Bancroft (Westminster Books) published reprints of this first (numbered „302“ on the textbook and on the rear flap), as well as of present edition (numbered „108“ on the front flap), both of them titled »Peter and Sally on The Farm«.

Design, Content: With the panascopes Kubašta created true gems of cardboard and paper, his „Farm“ is a spacious, lovely masterpiece of paper engineering, with numerous details to discover at second sight. Additionally 5 free standing characters a loosely inserted in a strap.

Condition: Corners and edges of the flaps very slightly worn, all pictorial elements complete, all mechanism intact, overall a fine copy of one of Kubašta’s best-known works.

Rarity: The domestic Artia editions are very hard to find indeed, it’s mostly the Bancroft „foreign“ editions that appear on the market, due to their probably higher print run; in complete state with all 5 free standing characters inserted and well-preserved like the present copy of particular rarity and highly collectable.