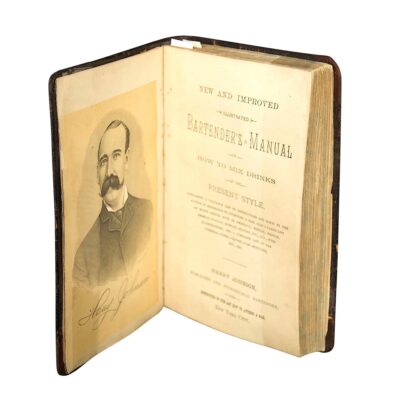 First illustrated edition of this pioneering manual on opening, stocking and operating a bar as well as mixing cocktails, written by „the father of professional bartending“ Harry Johnson.

Contents: Prussian-born Harry Johnson (1845-1933) was a self-taught pioneer bartender who owned and operated saloons across the US in the late 19th century and the early 20th century. He is best known for the »New and Improved Bartender’s Manual«, an influential book that contained many original cocktail recipes. Perhaps even more importantly, his manual was the first book to offer bar management instructions. Johnson opened the first ever consulting agency for bar management and has been called „the father of professional bartending“ (Wikipedia).

Johnson’s »Bartender’s Manual« was published with a larger English part and a smaller part in German language, both parts with differing title pages, prefaces by the author and table of contents. It includes an introducing chapter consisting of „a valuable list of instructions and hints by the author in reference to attending a bar“, followed by „a complete list of bar utensils, wines, liquors, ales, mixtures etc., etc.“ and finally detailed recipes for 186 mixed drinks (158 for the German part), 16 of which are shown in cocktail glasses ready to be served on the lithographed plates, including one of the first mentions of a Martini cocktail (p. 38f., plate no. 13). Johnson’s recipe collection is a timeline of the American Golden Age of Cocktails. Additionally present second edition of his manual contains partly illustrated advertisements for New York beverage suppliers and bar equipment, but also for »Harry Johnson’s Café & Restaurant« at 1 & 2 Hanover Square in Down Town Manhattan.

The first edition of present manual, published in 1882, contained only 156 receipts and lacks the illustrations and the appendix. A third edition appeared in 1900, containing the first written recipe of the Marguerite cocktail, an ancestor of today’s dry Martini. In 1934 a fourth and last edition followed posthumously.

Condition: The book was originally published as paperback, the original cover with typographic title is not bound in. Spine, joints and corners of binding skilfully repaired, book-block cut to fit the private binding, pp. 14, 16, 150 and 152 with tears, all of which consolidated with acid-free tape, p. 28 with missing pagination, some pages finger-stained and with water-stains along the margins; overall a solid copy though, taking into account it’s probably intense use.