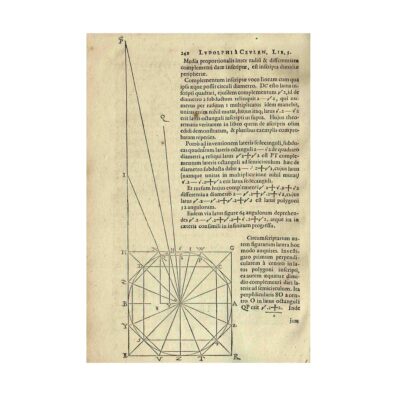 1st Latin edition of this posthumously published important treatise by mathematician, fencing champion and professor for military engineering at the Leiden engineering school Ludolph van Ceulen (1539-1610), translated from the original Dutch into Latin by his widow Adriana Symonsz in cooperation with van Ceulens pupil Willebrord Snell (1580-1626).

Contents: A humanist scholar more than a practitioner like his master, Snell not only translated the original Dutch edition published in the same year, but also adapted, commented and even criticised it to some extent. This is why preceded Latin edition is a veritable dialogue between two approaches to mathematical science in the early modern period. Van Ceulen nowadays remains famous for his calculations of the number π, which he worked out to 33 points of decimals in the present work. – 2 leafs with the dedication by Symonsz, in this edition printed by Marcus originally bound in after the title leaf, are missing (see copy at BSB). Also in 1615 another issue with the same pagination but varying title pages was printed by Colster (see copy at Museo Galileo, Firenze).

Condition: Cardboard binding with extensive traces of use and with worm holes, blank end leafs missing, title page with one small fault at lower margin, last 3 leafs loose and torn at folds, paper moderately foxy and time-stained, some ink marginalia.