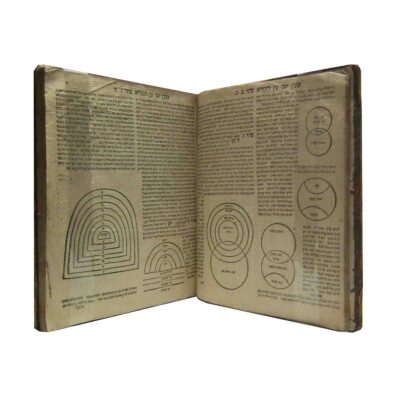 Rare edition of this important and illustrated Kabbalistic treatise by Abraham ben Mordecai Azulais (ca. 1570-1643), first published posthumously in Amsterdam in 1685. Preceded book was printed in the town of Zhovkvka (זאָלקוואַ (Yiddish), Schowkwa (German), Żółkiew (Polish), nowadays Жовква (Ukraine). Founded in 1593 Zhovkvka’s Jewish community made up almost half of the town’s population until it’s extermination during the Holocaust. Under the reign of Polish King Jan Sobieski (1674-1696) Zhovkvka was royal residence and a hub for relgious life, arts and commerce. In this liberal period the Jews of Zhovkva also founded a printing house (1690) and became pioneers in Jewish printing in todays Poland and Ukraine. Starting with 1772 (until 1918) the town was part of the Habsburg monarchy. Due to the »Patent of Toleration« (1781) issued by Austrian Emperor Joseph II., Zhovkva’s Jewish Community agian gained extended religious freedom which also supported the printing of books with religious contents. In this period Gershon Letteris Volf ran the communities printing press in the 5th generation, and among others he also published a number of writings about the Kabbalah, e.g. preceded treatise by Azulai.