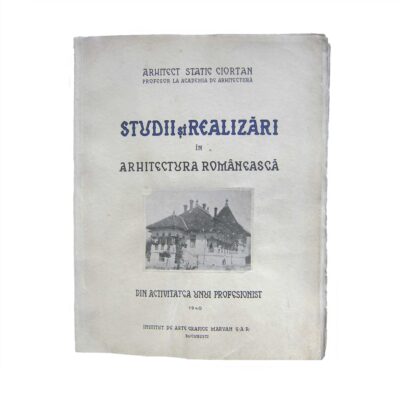 Statie CIORTAN: STUDII ȘI REALIZĂRI ÎN ARHITECTURA ROMÂNEASCĂ [STUDIES AND REALISATIONS [OF PROJECTS] IN ROMANIAN ARCHITECTURE]. Din activitatea unui profesionist [From the activities of a professional]. With 128, mostly full-paged illustrations after clichés, where of 1 tipped-on the front cover, reproducing original b/w photographies of Bucharest based photographer Weiss as well as sketches and technical drawings of the author, accompanied by 3 photo portraits (one of the author). Bucharest: Institutul de Arte Grafice »Marvan« 1940.

Among others Ciortan, in his function as chief architect of the Romanian Ministry of Finance, planned numerous important public buildings that are landmarks of historical architecture in Bucharest until today, e.g. the main building of the Romanian Postals Services and the headquarters of the Romanian State Archives. Additionally he planned apartment buildings for officials of his ministry, villas and country houses for their executives, as well as office buildings for banks and most of all, for branches of the financial administration, in Bucharest and other parts of Romania. Many of them are depicted in this summa, printed on high quality glossy paper. Statie Ciortan was a major proponent of the so called »Neo-Romanian«-style, a patriotic, aesthetically spoken historistic and modestly modernising attempt to create a unique Romanian architecture starting in the 1920s.

Spine of the fragile cover skilfully renewed, front cover slightly wavy, tipped-on illustration with two small faults at corners, boards and block with some slight traces of use, some sheets partly loose, otherwise fine copy of this prestigious and hard to find item offering a wide coverage of unique Romanian architecture of the times.