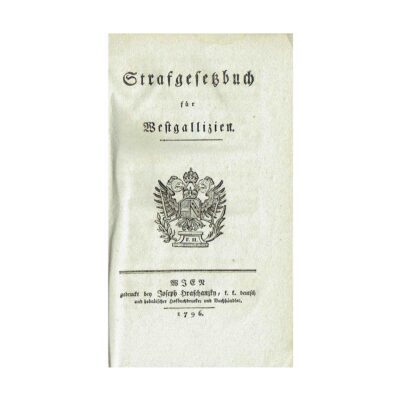 Exceptionally rare first edition of the founding codex for modern Austrian criminal law and an important precursor of the ABGB (Civil Code for Austria).

Edition, Content: The „Strafgesetzbuch für Westgallizien“ (1796) by jurist and president of the Habsburg’s court commission on legal matters, Matthias Wilhelm von Haan (1737-1816), is the very basis for the first modern Austrian penal code from 1803. The code was written for Western Galicia (large parts of today’s south and southwest of Poland with the cities of Krakow and Lublin), which had been annexed by the Habsburg Empire only the year before as part of the third partition of Poland, and it was intended to serve as a test run in the Habsburg judicial system for the implementation of law reforms originated during the reign of Emperor Joseph II. and continued by Emperor Franz II/I.

In his work „On Torture“, the young von Haan had already commented on one of the most important questions of preceeding Theresian criminal justice, and he was then prominently involved in reforming legislation and administration in the spirit of Enlightenment during Joseph II. As an expert for Roman and German law, he finally played an outstanding role in the completion of the Austrian Civil Code „Allgemeines Bürgerliches Gesetzbuch“ (ABGB, 1811). – Attached to the actual code is a folded table of cases negotiated by the Criminal Court of Cracow for the first quarter of 1797.

Provenance: Front pastedown with the owner’s stamp (from the 1st half of the 20th century) „Piet Frühwald“.

Rarity: Of exceptional rarity in trade. As of May 8, 2022, not a single copy of the present title can be traced at auction via JAP/APO and RBH since 1906.