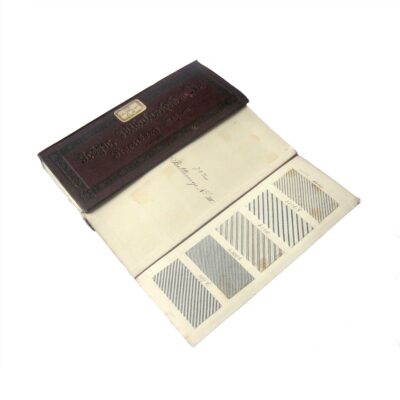 Gorgeous pattern book of weaving mill Gröger, Mikulaschek & Co. from Sternberg in Moravia (nowadays Šternberk in Czech Republic). The company was the most important of it’s kind in the region, a traditional stronghold for textile processing in the Czech and Moravian lands and a prospering cotton and silk industry since the 19th century. A place where important inventions were made (e.g. the Jacquard-loom by Karl Langer in 1832) and a school for weavers was founded in 1872, Sternberg in particular became a centre four colouring and weaving English cotton with it’s more than 1000 mechanical weaving looms around 1900. In 1886 Gröger, Mikulaschek & Co. opened a new factory with enlarged capacity, and for appropriately increasing the company’s selling activities pattern books like the present were published, in this case for promoting their exhaustive range of designs for bedclothes.

Each of the samples shows a different pattern, striped or plaid, red or blue, or a combination of those forms and colours. Each of them is sized 7:3,5 cm, tipped-on in equal arrangement following a pencil frame and marked underneath with a four-digit number (199-8695) and sometimes additionally with a letter by hand with ink.