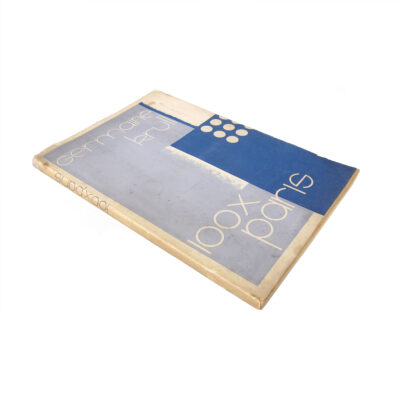 First edition of Germaine Krull’s pioneering and iconic photobook about Paris in the 1920s, here in the most attractive of several covers the book was offered with, showing a geometrical composition in constructivist manner and minimalist title typography in small letters by an unnamed artist. Title, preface, table of plates and captions are in English, French and German.

Krull’s view of Paris, where she had moved to in 1926 after having evolved as a photographer in Berlin, The Soviet Union and Holland, is in great parts an iconic example of her progressive idiom, inspired by the Bauhaus program of »neue fotografie« and the aesthetics of »Nouvelle Vision«. In the same time »Paris x 100« is Krull’s second photobook in a strict sense, a revolutionary media concept of combining photography and text invented in those years, that Krull was a world pioneer of.

By using a small, light and easy to handle hand-camera Krull developed her own picture language, focussing on close-up views and changing perspectives. She also concentrates on certain motifs, i.e. metal structures (e.g. the Eiffel tower), street life and car traffic, here accompanied by classic panoramas and views of Paris sights and thus genuinely contrasting the historical monument with the modern city. Her skills made her not only a wanted photojournalist (e.g. for the „Vu“ magazine) and photographer for advertising (e.g. Peugeot) as well as fashion, but also the most important photo artist in Paris circles alongside Man Ray.

Spine of dust wrappers with shelf-wear, covers slightly worn and stained, folded edges with minimal faults and tears (two of them repaired with acid-free tape), inside clean and bright; a highly collectable copy indeed, very hard to find with this dust wrapper in comparably good condition.