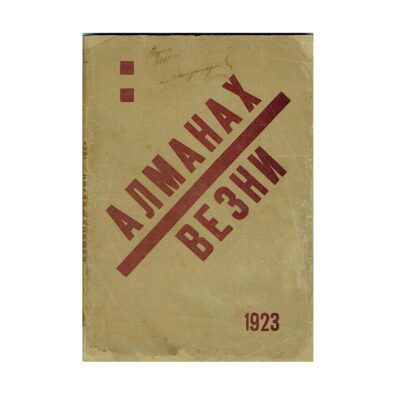 Key publication of Bulgarian modernism in which it’s leader Geo Milev sought to summarise and sustain the progressive and international orientation of his magazine »Vezni« (Scale, 1919-22). The texts are penned by Richard Dehmel, Carl Einstein, Ilya Erenburg, Vladimir Mayakovsky and other representatives of European avant-garde, as well as by leading Bulgarian proponents such as Chavdar Mutafov, Lamar, Nikolay Raynov, Khristo Yasenov and Peyo Yavorov, who are also artistically portrayed, mainly with wood-cuts (e.g. by Geo Milev and Ivan Milev). Published in the year of the September communist uprising and the ensuing suppression to which Geo Milev and Yasenov were to fall prey in 1925, the almanac and its cover design of geometric abstraction clearly demonstrates the proximity of Milev’s circle to the constructivist aesthetics of the Russian revolutionary avant-garde artists like El Lissitzky.