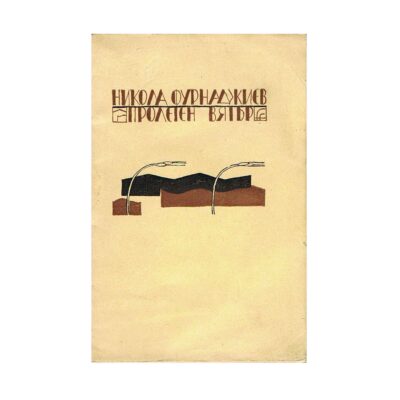 First edition of this collection of revolutionary verse by the „untamed and charming barbarian“ (Matejic) Furnadzhiev, alongside Asen Razcvetnikov’s collection of poetry »Sacrificial pyres« (1924) and Geo Milev’s key poem »September« (1924) the only published volume of verse by the revolutionary artists and poets of the »September group«. Dechko Uzunov’s cover illustration interprets folklore motifs of mountains and ears of wheat in a modernist, dynamic as well as minimalist interplay of typography and title visualisation.

Rear side of cover with library’s stamp and label, paper slightly time stained, otherwise well preserved copy of this hard to find item. Outside Bulgaria only three copes worldwide are traceable according to OCLC and KVK, at the BSB, NYPL and University of Chicago Library.- Jacono 26 and 29 as well as 38 for other covers by Uzunov; Fileva/Genova, Uzunov 2003, p. 154 (Unzunov’s cover for Svetoslav Minkov’s grotesque novel »Chasovnik« (»The Watch«, 1924); Matejic 1981 cit. SOBA 1.145.418.