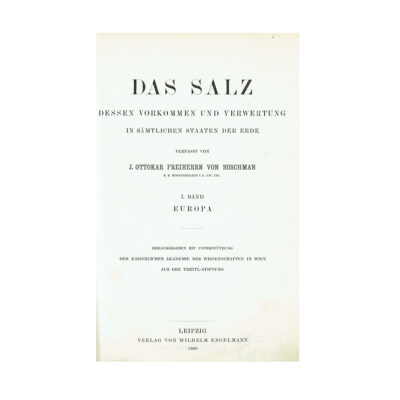 Josef Ottokar BUSCHMAN: DAS SALZ. [SALT. Its reserves and exploitation in all countries of the earth]. II vol. (Europe (I), Asia, Africa, America and Australia with Oceania (II). Leipzig: 1906-1909.

First and only edition of this fundamental account on the world’s salt industry by Austrian mineral collector and economic author Josef Ottokar Freiherr von Buschmann (1854-1921). A high ranking official of the Department of Salt Mining in the Austrian Ministry of Finance, Buschman probably not only arranged the acquisition of the magnificent halite specimen from the salt mines of Wieliczka (nowadays in Poland) to enrich the minerals collections of the Vienna Natural History Museum. He also contributed profound studies on salt reserves and the salt monopoly of the Habsburg Empire (1892, 1896, 1898), before he finally achieved to write his magnum opus dealing with the global salt industry and published in this rare 2 volume book in 1906 and 1909.

The work consists of exhaustive geological, historical, technical and economical data related to salt, especially concerning reserves, exploitation, trade, import and export, as well as consumption figures for all continents and countries. The chapter for Germany e.g. expands over 150 pages, the chapters related to Russia and the U.S. cover over 50 pages each. Vol. II has a particular focus on China, Japan, as well as British, French and other colonial territories. An index at the end of volume 2 eases searching for relevant information. – Bottom of spines with gilt (Romanian) owner’s imprint „D-ția G-lă R.M.S.“.

Front end paper ripped out in both volumes, joints in parts broken, spines and edges in parts bumped and heavily worn, boards slightly worn, edges with some sports, apart from minor hand-written notes inside overall fine copy of this still indispensable reference work, very hard to find on the market.