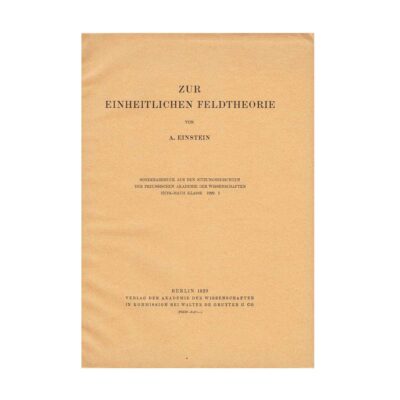 First offprint in the original wrappers, of this important paper by Einstein formulating groundbreaking developments towards the formulation of the Unified Field Theory.

Content: »On The Unified Field Theory« is one of Einstein’s last scientific core works. According to Weil „This paper represents a new development which was immediate news. A translation by L.L.Whyte appeared in the (London) Times of Feb. 4, 1929. It was quoted in full in „Observatory“, vol. 52, under the title „New Field Theory“ pp.82-87 and (1930) pp.11-118.“ In 1928 Einstein embarked on a new approach to a unified field theory, involving what he called „distant parallelism“. By early 1929 he had solved the main problems involved in writing down field equations for his unified field theory. On the day of offical publication of the third of a formidably technical series of 9 articles on the theory, excited headlines appeared in newspapers around the world. (Cf. Parkinson, Breakthroughs, p.279.)

Condition, State: Fine, uncut, thus unread. – The list of academy offprints on the rear side of the cover states present offprint not in last place. All offprints listed later were printed in 1929 though. The typeset of all pages is identical to other authentified offprints of this papers. This indicates that our copy is indeed a first offprint, but presumably with a later cover.