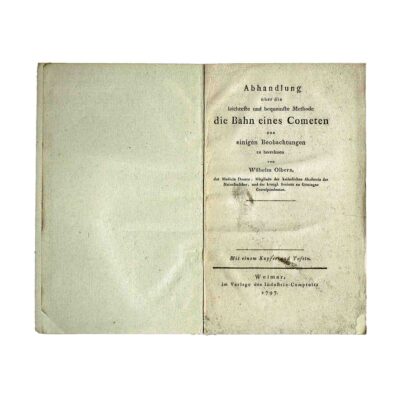 First edition of Olbers‘ groundbreaking work on computing the orbit of comets, 1797

First edition of Olbers‘ groundbreaking work on computing the orbit of comets, together with the substantially corrected and enlarged 3rd edition from 1864 as well as a rare offprint of a paper by Ladislaus Weinek from 1904 depicting graphical evidence of Olbers‘ method.

Contents, Author: With this treatise, the Bremen based physician and astronomer Heinrich Wilhelm Olbers (1758-1840) established his reputation as one of the leading scholars on astronomy of his time. Olbers had discovered a comet in 1796 and developed a new method for calculating his path. This method replaced the tedious and often inaccurate calculations of Euler and La Place. „In a letter to F.X. von Zach, director of the newly founded observatory on the Seeberg, near Gotha, Olbers asked weather his treatise on this method should be printed, and if so, how this could be done. After reading the treatise and using it with excellent results to compute the orbit of the comet of 1779, which had presented great difficulties to many astronomers, von Zach decided to see it through the press himself. It appeared at Weimar 1797.“ (DSB).

Condition: Cover at edges and corners slightly worn, title page with some ink staines and one restored fault at lower right corner, some pages slightly foxy and water-stained, generally a solid copy. Cover of present copy of the 3rd edition (enclosure 1) with some small wear, paper in parts foxy, with owner’s stamp on pre-title. Wrappers of the academy paper (enclosure 2) slightly stained, minimally torn at margins, otherwise well preserved.

Rarity: Very hard to find in this set, particularly with the late but important supplement by Weinek, during this period director of the Prague observatory. – Reference: DSB X, 198; Houzeau-L. 11965; Poggendorff II, 320.