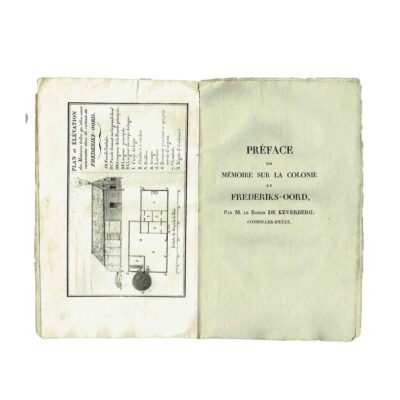 First and only contemporary description of the Netherland’s oldest colony of benevolence, enriched by two lithographic plates, the one showing a ground plot and view of a colonist’s house, the other a panorama of the main street of this facility.

Preceded 1st edition of this important work was published in a French version written by Dutch government administrator and social reformer Karel Lodewijk Keverberg Van Kessel and is based on the original Dutch manuscript of the projects main political architect, Johannes Van den Bosch (1780-1844), a high ranking military officer and later Governor of the Dutch East Indies. Keverberg also added a lengthy preface and notes to Bosch’s manuscript.

Founded in 1818, Frederiksoord, near Zwolle in the Drenthe province, was a prototype free to enter and to leave agricultural colony projected for 1500 settlers and their families, the first of 3 such free (of totally 7) „Koloniën van Weldadigheid“ (the others were Wilhelminaoord and Willemsoord) founded and funded by »The Society of Benevolence«, a trust of enlightened nobles, high officials and businessmen with philantrophic, macroeconomic impetus, patronised by Prince William Frederick (who also gave Frederiksoord it’s name). The expressed goal of the colonies was to provide impoverished people (of which many had drifted into unemployment, poverty, neglect and subsequently also crime during and after the Napoleonic Wars) with employment and education, therefore offering tools for maintenance as well as for social and economic reintegration.

Evaluations on the founder’s intentions nowadays differ. Whereas some praise them as the creators of one of the most remarkable social experiments, based on 19th century Utopian thinking on the social order, others stress that they basically wanted to clean land for future profits on a large scale, by the means of exploiting labour and accompanied by social segregation, humiliating surveillance as well as correction and punishment. According to a contemporary articel in the Brockhaus encyclopedia the settlers had to be disciplined, clean and thrifty, otherwise their salaries and even natural produce was retained. „Still, being a Lowlands pauper just after the Napoleonic wars can’t have been much of a picnic. Federiksoord was, to be fair, less punitive than the younger colonies at Veenhuizen where inmates were walled in to prevent escape but, looking at the dreary wastelands of Drenthe stretching out in every direction, it is hard to imagine where to escape to other than the bottle. Van den Bosch’s record in introducing forced agriculture to the Dutch East Indies has won him few accolades from post-colonial historians but there is no doubt that his intentions here, while hardly charitable, do share some attributes of social reform with contemporaries like Robert Owen.“ (Cites with many thanks to Richard Neylon, ILAB).

In Frederiksoord the »Society of Benevolence« today still has its offices. Furthermore, there is a guesthouse, a school of horticulture, and restaurated colony’s cottages, in which the early colonists lived. The „Koloniën van Weldadigheid“ are properties intended to consider for nomination for UNESCO World Heritage List.

Although well available in institutional holdings this book is particularly hard to find.