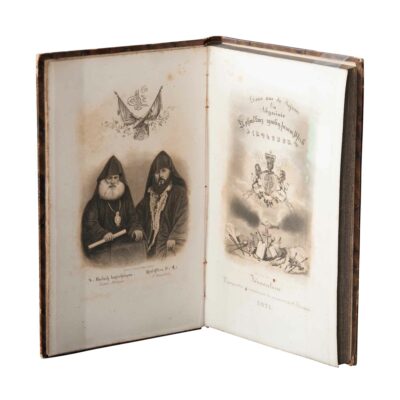 Contents: In the years 1867 and 1868 Dimotheos Vartabet Sapritchean, an Armenian priest from Constantinople visited Ethiopia (Abyssinia) as a member of a diplomatic mission with religious research interest led by the Armenian Archbishop Sehan (Isaac) of Jerusalem. At the request of the British government they were entrusted with letters of the Armenian Patriarch at Constantinople and Jerusalem appealing to ask the Ethiopian Emperor Tewodros II (1855-68) to pardon European captives at the fortress of Maqdala. The mission travelled from Jerusalem, via Alexandria, Cairo, Suez, Jeddah (Saudi Arabia), Sawakin and Kassala (both in nowadays Sudan) to Ethiopia. Dimotheos‘ and his fellow travellers diplomatic mission failed, but their journey was rich in unique insights and experiences. Back in Jerusalem he therefore wrote present detailed travel account, in which he claimed that during his stay in Aksum he was allowed to inspect the true »Ark of Convent«, which he also describes. Furthermore Dimotheos described Ethiopian culture and religious customs, the latter were of particular importance to Armenians, as their own Orthodox church and the Ethiopian share a century long tradition.

A much less rare French translation of Dimotheos‘ account was published simultaneously by the Jerusalem Armenian printers at St. Jacques Convent, also with the engraved frontispiece depicting Dimotheos and Isaac and an engraved title page in French and Armenian; a German translation followed in 1888.

Rarity: As of June 2nd 2022 OCLC/WorldCat and KVK show 7 copies of the Armenian original worldwide in institutional holdings (Harvard, LOC, UCLA, Univ. of Michigan Libraries as well London [British Library], Jerusalem [Nat. Lib. of Israel] and Yerevan [Nat. Lib. of Armenia]). RBH and JAP/APO show no auction results at all.