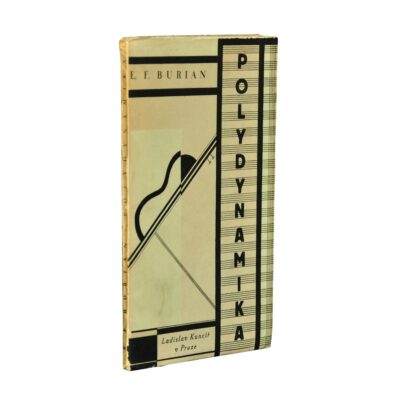 Czech Avant-Garde music and theatre, with cover art and typography by Obrtel

First edition of this important work about avant-garde music and theatre theory by Emil František Burian (1904-59), a multi-talented musician, composer, poet, actor and theatre director dedicated to Dada, Futurism and Czech Poetism, whose agility later also helped him to survive the Holocaust. As member of the eminent, Prague based »Devětsil« avant-garde group in the 1920s and 1930s, Burian was closely connected to artists like Vít Obrtel, who designed the cover and executed the rich typographical work of „Polydynamika“, being his very first book design at all. With this item Obrtel already develops main elements of his constructivist cover art: complex orthogonal spaces and lines with reduced usage of colour incorporating the title typography, „a typical Obrtel design, combining lyrical and functional elements.“ (Vloemans)

Cover very slightly time stained and with minimal traces of use, otherwise a very clean copy of this scarce item. OCLC shows 8 copies in libraries worldwide, 5 of them in the US.