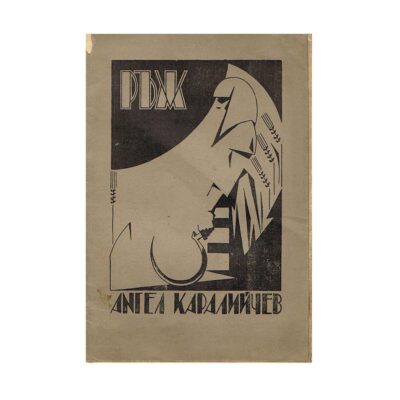 First edition of this volume of prose published with a cover on grey or alternatively cream stock.

Content: Published in the book series of the Communist magazine »Nov Pat« (New Path) which was considered a mouthpiece of the September literature, Karaliychev’s 10 short stories, together with Anton Strashimirov’s novel »Choro« (Round dance, 1926), were the only prose works published by authors connected to the communist »September-uprising« from 1923. There works were confiscated and a huge part of the print run was destroyed.

Illustration: Equally, Aleksandar Zhendov’s lino-cut or wood-cut cover design is regarded as one of the most notable examples of avant-garde book illustration in Bulgaria: a folkloristic motif depicting a peasant with a sickle, cutting grain stalks, turns into a constructivist, contrast-rich icon of the revolution, into the grim reaper of the bourgeoisie.

Condition: Small faults at bottom and top of spine professionally restored, margins slightly time-stained, otherwise fine copy of this particularly scarce item. According to OCLC and KVK there is no copy at all in library holdings worldwide, Bulgarian National Library also shows no entry.