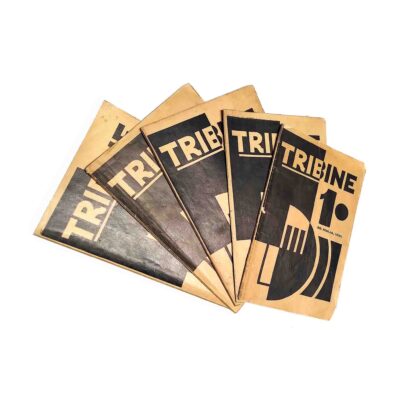 Complete set of this 1st year of »Tribīne«, a most important magazine of the highly productive left-wing Latvian avant-garde movement.

Content: Present 1st year of »Tribine« unites literary texts (sometimes typeset with experimental typography), as well as essays and notes particularly about the arts, literature and politics, mainly contributions by publisher Linards Lāicens and the most prominent authors of the Latvian avant-garde movement, like Andrejs Kurcijs, Leons Paegle. Many of the Latvian authors were signing with monograms, pseudonyms or not at all to prevent troubles with the authorities. Also included are texts by congenial foreign socialist writers like Henri Barbusse, Johannes R. Becher, Ludwig Renn and Maksim Gorki.

Illustration: The magazine’s cover linocut is designed by Latvian and Soviet avant-garde artist Ernest Kālis (1904-39), showing a clear but nevertheless autonomous reference to Kassáks »Bildarchitektur«. Kālis also acted as art director for the the predecessor of »Tribīne«, the periodical »Kreisā Fronte« (see pos. 9-11 of this list). Though text illustrations in »Tribine« are rare they are nevertheless remarkable, e.g. a striking lino-cut (presumably by Samuils Haskins) illustrating the title page of issue no. 5/6 (1932).

Condition: Issue no 1 with some small faults at edges and corners, covers of nos. 1, 2 and 4 slightly creased and worn, margins in parts minimally torn, paper slightly time-stained, otherwise well preserved copy of this fragile magazine.

Rarity: Due to it’s publishing history particularly rare, even in single issues. The only holding of a complete set of »Tribine« in institutional holdings worldwide is in possession of the Latvian National Library. Apart from this no complete year is traceable. OCLC and KVK however show single issues at MOMA, The Frick Art Reference Libary (New York) and Waseda UL (nos. 1 and 2 (1931), 2,3 and 5/6 (1932).